Products
For Traders
For Everyone
For Businesses
Fees
Company
Prices

We have prepared an easy-to-use Cardano staking guide that any crypto novice can easily use if they are interested in adding ADA staking to their investment strategy.

Choose a coin to stake

Cardano is a proof-of-stake blockchain network. It was built on research conducted by peers, and later designed using strategies based on available methods. It is driven by state-of-the-art technology that offers fantastic security and stability for DeFi and various decentralized applications, networks and organizations. As it uses a proof-of-stake protocol, you can stake ADA, Cardano’s native cryptocurrency, to support the network’s operations and earn interest for your efforts.

Many blockchains depend on staking nodes that help their networks operate efficiently. Cardano is unique in this respect, as it depends on staking pools. With this model, the network guarantees that the number of validators remains large, so there are plenty of node operators to ensure network stability.

Having your own pool could mean earning greater rewards from staking. However, it is a far more complicated process than most users can perform. It requires technical expertise and a bundle of technical skills. So, in order to earn rewards by staking ADA in Cardano PoS staking wallets, users either have to own their own pool or delegate their ADA coins to those already operating a pool or pools.

Delegating your ADA cryptocurrency for staking to an outside staking pool is easier yet often less profitable, and it can be a bit complicated for an average person. It will take some time to learn how the process works, find a good staking pool, and learn best practices related to the technical part of staking.

We have good news for you. To benefit from staking ADA, you don’t need to run a staking pool or delegate your coins to another. We have simplified the process for you. With CEX.IO, staking is no more complicated than buying or selling a cryptocurrency. You just have to buy the desired amount of ADA, or deposit the coin to your account on our platform.

All the other complicated technical detail is handled by us. You will get your staking reward automatically every month — a perfect way to earn passive income. Let’s go step by step on how to do that.

First, log in to your account on CEX.IO. Then go to the Earn page, which you will find out under the Spot trading menu. A window with a complete list of stake-able coins will open up.

You will see Cardano on the list with all the available information connected to its staking. That includes APY (Annual Percentage Yield), its current price, the balance of it that you own (if any), how much interest you have already earned (if you staked it), and also the two actions that you can perform to add more ADA to your wallet.

Ways to add ADA to staking on CEX.IO

First, you should remember that if you have bought ADA on CEX.IO, you immediately stake it, and it is generating returns for you every month. And you do not have to enroll in a staking program before you can stake. You can do it any time you want, and it does not cost you anything to participate in staking. The percentage you see is the percentage you can expect to earn for the entire staking period.

The second method is to add funds to your account through the Add Funds button on the right, and at the same line where the Cardano symbol is located. When you press the button, the following window will pop up.

You will see your deposit address, where you should send your ADA coins if you already have them. Copy the address to use it in transfer from another wallet. When you are done, and the coins arrive in your wallet on CEX.IO, the staking process of the coins has started. Congratulations. Your rewards are on your way.

One more way to add Cardano ADA for staking is to buy it with your credit card. Again, you will have to use the same Earn page, where you should also see the Buy button on the same line where the Cardano symbol is. Click it, and a window will open asking you to choose the amount of ADA you want to buy with a currency of your choice: USD, EUR, or GBP.

Buy ADA with VISA or Mastercard in USD

Select the prefilled amount you want to use to buy ADA, or fill in your own amount if you wish. Then choose the currency you want to buy it with, and click BUY. A new window will pop up asking you to confirm your order, select your credit card, check the necessary boxes, fill in your CVV/CVC code, and click Buy Now. Congratulations, you have successfully purchased the coins, and they are placed in your wallet and staked.

You can see Cardano coin payouts on the very same Earn page on the same line where the Cardano symbol is displayed. The return fluctuates depending on many factors, mainly on the decisions of those who run the Cardano protocol. Currently, the APY (Annual Percentage Yield) is 2.6%. It may seem a bit low, but as we said, the yield fluctuates, plus it is compound interest, which means that you earn not only on the principal amount that you staked, but also on the interest you already accrued.

In simple terms, the interest is paid to your account every month. The following month, you earn not only on your initial staked amount but also on the interest that you made in the previous month. Thus, you earn more than you would if you kept your money for the same simple interest for a year. 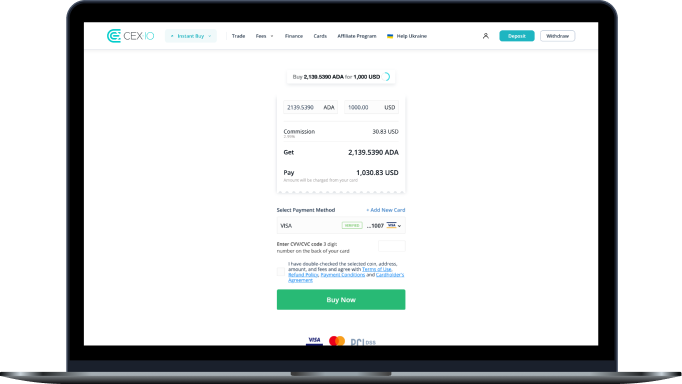 Choose a coin to stake

Use a Cardano staking calculator

Another way to determine how much money you will earn is to use the CEX.IO Cardano staking calculator. You will find our staking calculator on the Earn page. Log in to your account, go to the Earn, and then scroll down to the bottom of the page.

It’s effortless to use the staking calculator. Just choose a coin from the list of available stake-able coins. Then select the number of coins you hold (or want to hold). That's it. The calculator will give you the estimates for your future earnings daily, monthly, and yearly.

Each stake-able cryptocurrency has a minimum amount for staking. We have made the minimums as low as possible so that every user can afford to purchase any coin available for staking. Having lower minimums is counterproductive in our search for nodes, setting them up and maintaining them. As we do most of the work, we chose the minimum limits that could be good for you and CEX.IO.

The minimum amount for staking ADA is 10 (ADA). You can find the minimums for all stake-able coins using our staking earnings calculator. Simply drag the cursor left to the maximum, and you will see the lowest possible amount for staking any coin of your choice. 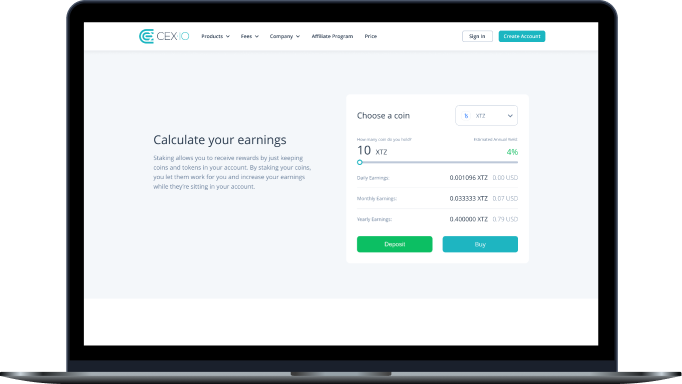 How often will you receive rewards for staking ADA?

Cardano network operates in epochs that last for five days. Thus, they pay the staking rewards after five days of staking. CEX.IO, in turn,sends staking rewards once a month for any stake-able cryptocurrency, including ADA.

You can trade your staked ADA coins

Many exchanges, or those that provide staking services, require staked coins to be locked. It means you can’t use them during the staking period. It is entirely different at CEX.IO. Your funds are never locked. You can use them for trading or withdrawing at any time.

This means you can earn rewards by staking your ADA coins and trading them simultaneously. As long as the coins remain in your account, your staking rewards are calculated and paid to you.

How do I un-stake Cardano?

As we have already mentioned, we do not have lock-up periods for staking on the CEX.IO platform. You can keep Cardano staked as long as you want, and un-stake it whenever you desire. As Cardano ADA is automatically staked when you buy it, you have to sell it in order to un-stake it.

Go to the Spot trading page, select the ADA/USD pair and then fill in the amount of ADA you want to sell in the table. Click Sell and you have sold your Cardano and un-staked it. You will receive the rewards you earned as long Cardano coins are in your account.

Last but not least, please be aware that staking Cardano on CEX.IO comes with risks. Therefore, do not stake or trade cryptocurrencies using money you cannot afford to lose. Before you decide to stake ADA or any other cryptocurrency, it is essential to discuss your financial situation and expectations with a financial advisor. Better safe than sorry.

CEX.IO does not take responsibility for losses suffered using our staking calculator or projections found on our website. They are preliminary estimates and can be affected by many factors. We pay staking rewards only after we receive them from a PoS provider, in this case, from Cardano protocol provider. We ask you to familiarize yourself with the staking terms of the Cardano network before you start staking ADA with CEX.IO.

We take risks very seriously and implement the highest security measures on our platform, yet some external factors can increase your risk, and you should keep that in mind before you begin staking. These are the main risk factors:

Nobody can control the crypto market. We can’t control the behavior of the market. It is very volatile and can rise or fall more than 50% in a single year. If it fails, you may incur losses, even if you earn rewards by staking.

We trust that the Cardano blockchain will keep to its promise to reward the stakers of ADA. Yet, nobody can be absolutely certain of the future. You risk not receiving rewards due to the Cardano network failing to pay them.

In the case of a 51% attack, a group of miners who own more than 50% of the network can perform fraudulent actions, which may result in the collapse of the entire network. We closely follow various networks to see if there is any potential for such an attack, but you should also be aware of the risk.

Please be aware of the risks involved with any trading or savings done in any cryptocurrency market due to its high volatility. Please familiarize yourself with the full Savings terms before deciding to participate in the Savings process.

Please be aware of the risks involved with any trading or staking done in any cryptocurrency market due to its high volatility. Please familiarize yourself with the full staking terms of each applicable Staking coin provider before deciding to participate in the Staking process.

We would to know something more about you before providing a services.

We would like to know more about you before providing our services.